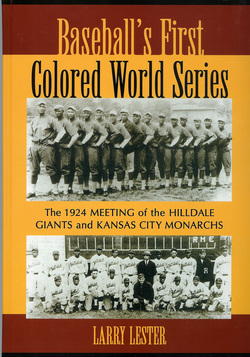 "Any World Series is interesting, but one featuring five future Hall of Famers draws particular notice.  Yet, until now, little attention has been paid to the first Negro League World Series, even though Judy Johnson, Biz Mackey, Jose Mendez, Bullet Rogan, and Louis Santop were in the lineups.  In Baseball’s First Colored World Series, Larry Lester offers a wonderful narrative of this championship’s importance to black baseball, but he also provides a complete statistical record, so that current and future fans may compare the players and celebrate their performances.

One of the book’s greatest values is that Lester brings together information that can be difficult to track down in archives and microfilm of the black newspapers.  He begins with a quick summary of black baseball, setting the stage for the 1924 season.  That year, the Hilldale Club led the Eastern Colored League, and Kansas City captured the Negro National League pennant.  A chapter aptly titled “Scouting Reports” provides short but detailed biographies, including basic statistics (height, weight, birth and death dates, list of teams played for), and close-up photographs of every player—not just the stars.  Lester also describes each man’s strengths and weaknesses in a way that statistics alone cannot express.

For the Series itself, the book provides a game-by-game analysis, including dates, locations, pitching line-ups, but also game conditions, so that we can consider temperature, humidity, winds, and the general forecast.  For the parks, Lester also notes their street address, when they were built, and their capacity.  He then provides a narrative background to each game, explaining how far the teams had to travel, the condition of the fields, and other interesting socio-economic details.  When available, he weaves in first-hand observations from people who attended the games.  After the narrative, Lester provides full offensive and defensive statistics, followed by a play-by-play summary, so readers can follow the action—all the way through to Jose Mendez’s 5-0 shutout in game ten, when Kansas City won the first Colored World Series.

Besides its valuable statistical information, the book also provides abundant illustrations, gathered from various archives and personal collections.  Among the less expected illustrations are a reproduction of the six-page Articles of Incorporation for the Negro National League of Professional Baseball Clubs and a Chicago Defender cartoon showing the fans’ eagerness to see the leagues’ best teams play a championship series.  The book’s first appendix contains a 24-page photo reproduction of the actual program for the series.  Appendix two provides the series batting order with full offensive statistics.  Appendix three provides each team’s full record for the 1924 season, complete with game dates, locations, scores, plus winning and losing pitchers. Appendix four offers “Home and Away Splits, by Player and by Pitcher”—vital for considering the impact of home, away, and neutral fields on individual players.  Appendix Five charts each Kansas City and Hilldale player’s performance against other league teams.  And finally, appendix six offers “Batter versus Pitcher Match-Ups During the World Series.”

Lester’s comprehensive research and scrupulous interpretations of game accounts provide a wonderful resource for anyone interested in early Negro League history, African American culture, or quality baseball in general.  This book is a valuable addition to any baseball historian’s library."

In 1924, after the Hilldale Club (often known as the Giants) captured the league crown in the new Eastern Colored League and the Kansas City Monarchs won out in the four-year-old Negro National League, the two teams met in what was to be the best-of-nine series for the world colored championship.  But a 13-inning tie in Game 4 and alternating wins throughout the series would force a 10th and deciding game, making it the longest World Series - black or white - on record in the modern era.

It was arguably the most dramatic, as well, as each team reeled off three wins in a row, four games were decided by a single run, and five were won in the final inning.