10 HIGHLIGHTS of the 50th ANNIVERSARY CELEBRATION 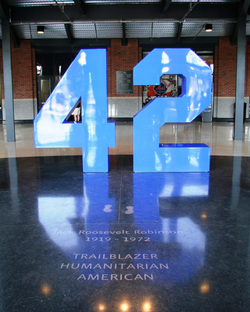 3.        Interim Commissioner Bud Selig, owner of the Milwaukee Brewers, retired Jackie Robinson’s number 42 in perpetuity.  After this season, no team will ever issue “42” again (during the regular season).  Players currently wearing the number will be allowed to wear the number until they retire.

7.       Ken Griffey, Jr., on the 50th anniversary of Jackie’s debut, changes to number 42, from his regular number of 24, to celebrate the occasion.  Deion Sanders, of Cincinnati, shortens his jersey sleeves in honor of Jackie Robinson.

9.        A reported 54,047 fans, in 58 degree, but chilly weather, attended the 50th anniversary celebration at Shea Stadium to honor Jackie Robinson.  Actual attendees through the turnstiles were 34,598.