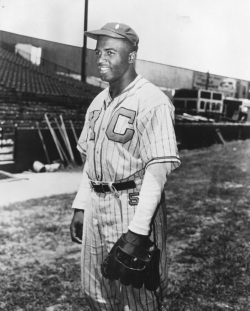 "A life is not important except in the impact it has on other lives." - Jackie Robinson

April 15, 1997, the 50th anniversary of his Major League debut, baseball retired Jackie Robinson’s number 42 in perpetuity, in recognition of his accomplishments both on and off the playing field.

In 1947, he became the first African-American player in the modern era to break baseball’s color barrier; ending roughly 80 years of baseball apartheid, known politely as the “Gentlemen’s Agreement.”

A member of six World Series teams, Robinson was inducted into the National Baseball Hall of Fame in 1962. He earned six consecutive All-Star Game nominations and won several awards during his 11-year major league career, including the Rookie of the Year (1947) and the leagues’ Most Valuable Player Award (1949).

In addition to his accomplishments on the field, Jackie Robinson was a forerunner of the Civil Rights Movement.

We remember him for his determination in overcoming racial prejudice, hatred and for his post-career activities as a Civil Rights mover and shaker. Beyond knowing that Jackie Robinson was one of the greatest players to ever play between the white foul lines, his efforts for equality and social changes in America were known to be Kingly and Gandhiist.

And for those reasons we honor number 42, eternally. 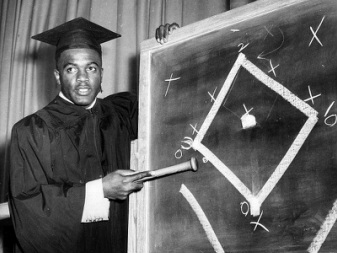 In his autobiography, My Own Story, Robinson recalled a 1946 event as a Montreal Royal, "Syracuse rode me harder than any other city in the circuit. They were tough on me both on the field and in the stands." He went on to recount an incident in which a Chiefs player came out of the dugout holding a black cat and shouted, "Hey Robinson, here's one of your relatives!"

What Americans did not know is this cat from Cairo, Georgia had nine lives.  Today the Jackie Robinson Foundation focuses on nine life values:

For scholarship information contact The Jackie Robinson Foundation where “Education is Their Pitch.”

On February 26, 1997, Major League Baseball announced that all teams would wear a specially designed Jackie Robinson patch to commemorate the 50th anniversary of breaking the game’s color and race barrier.

Of the 28 teams, 24 of them wear the Robinson patch at home and on the road.  The four other teams have special considerations:

The Chicago White Sox wear the Robinson patch  at home.  On the road: A Nellie Fox signature patch is worn in honor of the Hall of Famer, who debuted in 1947.

The Cleveland Indians wear the Robinson patch at home.  On the road: They wear an All-Star game patch promoting their role as host city for this year’s game at Jacobs Field on July 8.

The San Francisco Giants wear the Robinson patch at home.  On the road: They wear a 40th anniversary patch commemorating the move to San Francisco, from New York, in 1957.

The Pittsburgh Pirates wear the Robinson patch on the road.  At home:  A special Roberto Clemente patch to honor the 25 years since the Hall of Famer’s fatal airplane crash while delivery relief supplies to earthquake victims in Nicaragua.