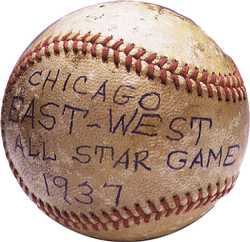 REVIEW by Publishers Weekly
Racist major league baseball policies expunged the box scores for most Negro Leagues players, but black newspaper sportswriters kept careful record of the immensely popular all-star games of the 1930s and '40s. Lester has assembled 21 years of headlined articles, photos, game stats and league records into a sort of Negro Leagues all-star game almanac a year-by-year reconstruction of every East-West game from 1933 to 1953, with Lester's own historical notes offering context for each year's entries.

Most of the text is actually composed of extracts from the sports pages of the Chicago Defender, Pittsburgh Courier, Baltimore Afro-American and other urban black newspapers. These columns are supplemented with occasional stories by white sportswriters (usually from left-wing newspapers of the era). In the '30s, the East-West "classic" drew 50,000 black and some white fans often more than major league games. By the time Jackie Robinson integrated the Brooklyn Dodgers in 1947, the East-West game had suffered mismanagement and personality problems, and began to lose both its loyal black audience and financial backers. There is an authentic, time capsule quality about Lester's collection and more than enough raw stats to fuel hot stove leagues across the country for many an evening.