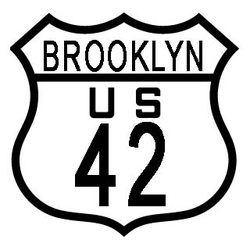 2.        At UCLA, Robinson led the Southern Division of Pacific Coast Conference in scoring twice, as a basketball player, in 1940 and 1941.  He later played professional basketball with the Los Angeles Red Devils in 1947.

3.        In 1940, before 98,203 fans at Soldier Field, Robinson scores a touchdown, on a pass from Boston College’s Charlie O’Rourke, against the Chicago Bears.  The College All-Stars lost to the world champions, 37-13.  This was the same Bear team that demolished the Washington Redskins, 73-0, in the NFL championship game.  At UCLA, Robinson had led the nation in punt returns with a 21-yard average and he also averaged 12.2 yards rushing.

4.        Robinson’s first encounter with major league baseball was on March 13, 1938, in Pasadena.  The Pasadena Sox, the city’s recreational team, played the Chicago White Sox in a fund-raiser.  White Sox manager Jimmie Dykes spoke of the 19-year-old shortstop, “If that Robinson kid was white, I’d sign him right now.  No one in the American League could make plays like that.”

5.        In March of 1942, Robinson, 23, and pitcher Nate Moreland, 25, had their first major league tryouts with manager Jimmie Dykes and the Chicago White Sox of the American League.  They were not offered contracts.

6.        Three years later, 1945, Robinson, along with outfielders Marvin Williams, 23, and Sam Jethroe, 28, tried out for the Boston Red Sox.  Red Sox manager and future American League president Joe Cronin did not attend the try out.

8.        Robinson batted second in the line-up and played first base on his first day in the majors. Robinson made 11 putouts without an error.  Hall of Fame umpire Al Barlick officiated at first.  The first major league pitcher he faced was Boston Braves’ 21-game winner, Johnny Sain.  Robinson went hitless in three at bats.

9.        Although hitless in his first major league game, Robinson scored the winning run against the Braves.  After Eddie Stanky drew a walk, Robinson laid down a bunt.  First baseman Earl Torgeson fielded the ball cleanly, but his throw bounced off of Jackie’s back.  Jackie was credited with a sacrifice, Torgeson an error.  Stanky and Robinson later scored the tying and winning runs on a double by Pete Reiser.  The Dodgers won 5-3.  The winning pitcher was Hal Gregg.

11.     On April 18, 1947, Robinson hit his first M.L. home run off of New York Giants’ southpaw Dave Koslo at the Polo Grounds.  It was reported, when Robinson returned to the dugout, no Dodger shook his hand.

12.     In his first major league season, Robinson led the National League in Stolen Bases with 29 thefts, that included three steals of home.

15.     On May 18, 1947, when Robinson made his first appearance at Chicago’s Wrigley Field, 46,572 fans attended.  Fifty years later, this figure is still the record attendance at Wrigley Field.

18.     At the end of the 1947 season, an Associated Press poll ranked Robinson second to singer Bing Crosby as the country’s “Most Admired Man.”

22.     On July 12, 1949, Robinson with teammates Don Newcombe and Roy Campanella, along with Cleveland Indian outfielder Larry Doby became the first blacks to integrate the all-star game.

24.     In 1950, Jackie starred as himself in the movie The Jackie Robinson Story.  Actress Ruby Dee, played his wife Rachel.

26.     On August 30, 1953, after two days on the injury list (bad leg), Robinson is struck out twice by Cardinal pitchers Eddie Erautt and Willard Schmidt, in the third inning.

27.     On April 23, 1954, Robinson stole second, third base and home plate in the same game.  Robinson steal of home sent the game into extra innings.  He later doubles in the 13th inning to score Junior Gilliam with the decisive run.

28.     Robinson’s most productive day at the plate was on June 17, 1954, when he hit two home runs and two doubles.  He also stole a base against the Milwaukee Braves.

29.     In the ‘55 World Series, Robinson’s steal of home plate is given as the motivational spark that propelled the Brooklyn Dodgers to their first and only world championship.  The steal came off of Yankee Hall of Famers, pitcher Whitey Ford and catcher Yogi Berra, with Bill Summers officiating.

31.     In the 1956 World Series, Robinson drove in Brooklyn’s first and last runs.  They were his only RBI’s of the series and both came at Ebbets Field.

35.     Robinson compiled his highest team batting averages against Pittsburgh and St. Louis.  He batted .342 against the Pirates, and .341 against the Cardinals.

36.     Robinson highest park batting averages came at Forbes Field with a .342 average.  He also hit .326 at Crosley Field in Cincinnati, and .317 at Connie Mack Stadium in Philadelphia.

39.     Hall of Famer Robin Roberts gave up the most hits, most home runs and most RBIs to Robinson, with 45, nine and 22, respectively.  The most triples given up to Robinson are three, by Dave Koslo; most doubles are 10, by Howie Pollet.  Robinson worked Herm Wehmeier for the most walks with 20.  And Stu Miller hit Robinson with the most pitches, five times, in only 12 plate appearances.

43.     Retired players who started their careers after 1947, and played more than ten years, with a lifetime batting average of .311 or higher include Jackie Robinson, Rod Carew, Roberto Clemente and Kirby Puckett.

44.     In his first eight seasons, Robinson led the National League in getting hit by pitches once, was second four times and third twice.  In fact, in 1951, three of the four most-often-hit National League players were black.  Jackie was hit-by-pitches a total of 72 times during his career.

47.     Robinson, along with Cleveland Indians pitcher Bob Feller, were inducted in the National Hall of Fame on July 23, 1962, his first year of eligibility.  Robinson garnered 78 percent of the votes, getting 124 of 160 votes, making the Hall by a slim margin of four votes.

48.     On October 15, 1972, Jackie Robinson threw out the ceremonial first pitch of the World Series, between the Cincinnati Reds and the Oakland Athletics at Riverfront Stadium.  He was the guest of commissioner Bowie Kuhn.  Robinson voiced his concerns about blacks in management stating, “One day I’d like to look over at third base and see a black man managing the ball club.”