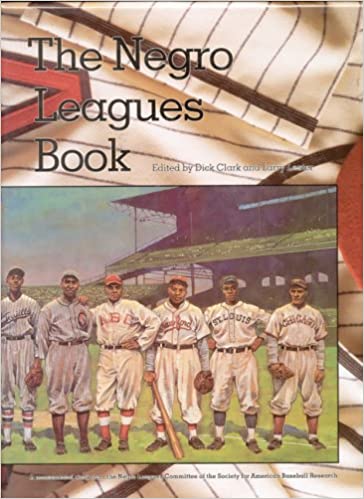 by Dick Clark and Larry Lester
SOLD OUT: Limited editions can be found at: http://astore.amazon.com/sabrwebsite-20/detail/0910137609

Many of our readers are aware of the work of Larry Lester in securing black baseball's place in the consciousness of baseball fans. He has done yeoman duty as a Board of Director and founder of The Negro Leagues Baseball Museum, is co-chair of SABR's Negro Leagues Committee and has done hundreds of hours Sherlocking (and occasionally "sheer-lucking") his way through reams of old newspapers in pursuit of box scores. Dick Clark is another indefatigable Negro Leagues researcher and is Larry's SABR co-chair. They were aided in their research by dozens of other SABR folks.

The first part of the book is a selection of brief essays, including brief league and city histories, key players and a special section on the 11 Negro Leaguers elected to the Hall of Fame so far.

The bulk of this encyclopedic volume is devoted to making some sense of the chaotic written record of the Negro League's past.

There are other interesting sections, like a very thorough cross-referencing of the dozens of players who went from the Leagues to the majors. Nowadays, most knowledgeable fans know that Jackie, Aaron, Banks, Campy and Mays got their start in the Negro Leagues, but may not be aware that lots of other '50s and '60s players like Minnie Minoso, Al Smith, Jim Gilliam, Elston Howard, George Crowe and that popular Met, Choo Choo Coleman, all got their start in professional black ball.

The last section of the book is primarily references for further study, including books, magazine articles, and Theses & Dissertations, as well as the important sportswriters who covered the Negro Leagues. The book closes with a couple of pages of movies about the Leagues and prominent players, like Satchel Paige, Jack Johnson and Jackie Robinson, who appeared in movies.

For all the painstaking and monumental work that went into the book, my favorite part is the dozens of photographs that pepper the text. Many have never appeared in a book before. In fact, many were printed directly from old negatives for the first time.

All-in-all, an excellent first edition of the book destined to be the standard reference for all who wish to learn more about, and do research on, the Negro Leagues.

Reviewed by James Floto, Diamond Angle
Published in 1994, The Negro Leagues Book is SOLD OUT
Limited editions can be found at: http://astore.amazon.com/sabrwebsite-20/detail/0910137609 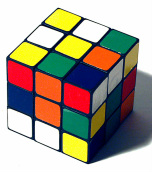 Every turn of a layer of colors results in a different color pattern. Similarly, every discovery of a piece of Negro League history results in additional complexity before settling into a final and correct status. After many years of trial and error, one layer of the cube or one season (or team, or player) is successfully restored. You relax and take a deep breath before continuing to the next level of effort. Once you master the research moves at one level, you try to produce the same results for the other levels. All the time knowing it will become increasingly difficult to get every level of the cube's history back to its pristine state. Your work may involve temporarily changing a layer of history to complete the next layer, before completing all the layers in sync.

Yes, researching the men of color reflect a phenomenon of research or visual perception that has enabled many fans to differentiate otherwise identical and confusing facts, producing a kaleidoscope of Pandemonium. Thus, creating twentieth century's most incredible, challenging and fascinating sports puzzle -- researching the Negro Baseball Leagues.