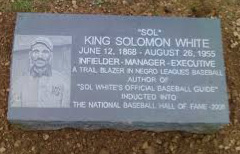 This was the 30th headstone installed and dedicated by Jeremy Krock's Grave Marker Project. 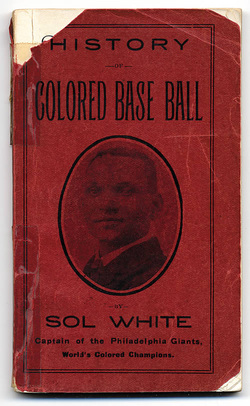 The 1907 book Sol White's Official Guide: History of Colored Base Ball was the first definitive history about black baseball in the U.S.  White, an African-American graduate of Wilberforce University, examined nineteenth-century baseball history.

In 1995, Jerry Malloy wrote that White's book, ". . . should increase historical awareness and provoke further research. This slender volume is still invaluable as a primary and a secondary source, a chronicle and a memoir, an elegy, and an alarum [call to arms], but its rarity has always been a problem for both the casual reader and the diligent scholar."

In 2006, the former sports editor for the New York Amsterdam News, Solomon White was elected to the National Baseball Hall of Fame in Cooperstown, NY.

Sol White articles on the internet:
Gone But Not Forgotten by Thom Loverro
Sol White's Genealogy Research by Jim Overmyer 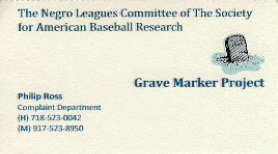 Please send all complaints to Philip Ross
Closing remarks:
"Now that Sol has been rescued from unmerited obscurity, the public-spirited might turn to the cemetery in which he resides. Frederick Douglass Memorial Park fell on hard times several years ago, overwhelmed by debt, financial scandal, and declining burials.  It has been a struggle for its slim staff – one office worker and two groundskeepers – to maintain the grounds and the records. Solvency seems a distant prospect."