"My Experience at the [2012] Jerry Malloy Negro League Conference" by R.J. Page 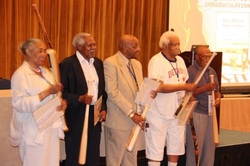 I must admit, I had no idea what to expect from my first SABR (Society of American Baseball Research) affiliated conference. On my way to the conference I was faced with the usual questions a high school freshman ponders before their first day of school: would I fit in, will I have anyone to talk to, do I know enough to be in a room with some of baseball’s premier researchers and writers? It did not take long before I could answer each of my questions with a resounding YES! There were no strangers at the Jerry Malloy Negro League Conference and everyone there had one common goal: To share what they knew about Black Baseball. What follows is a running diary of my experience at the Conference.

What Attendees had to Say about the Malloy Conference in Birmingham, AL 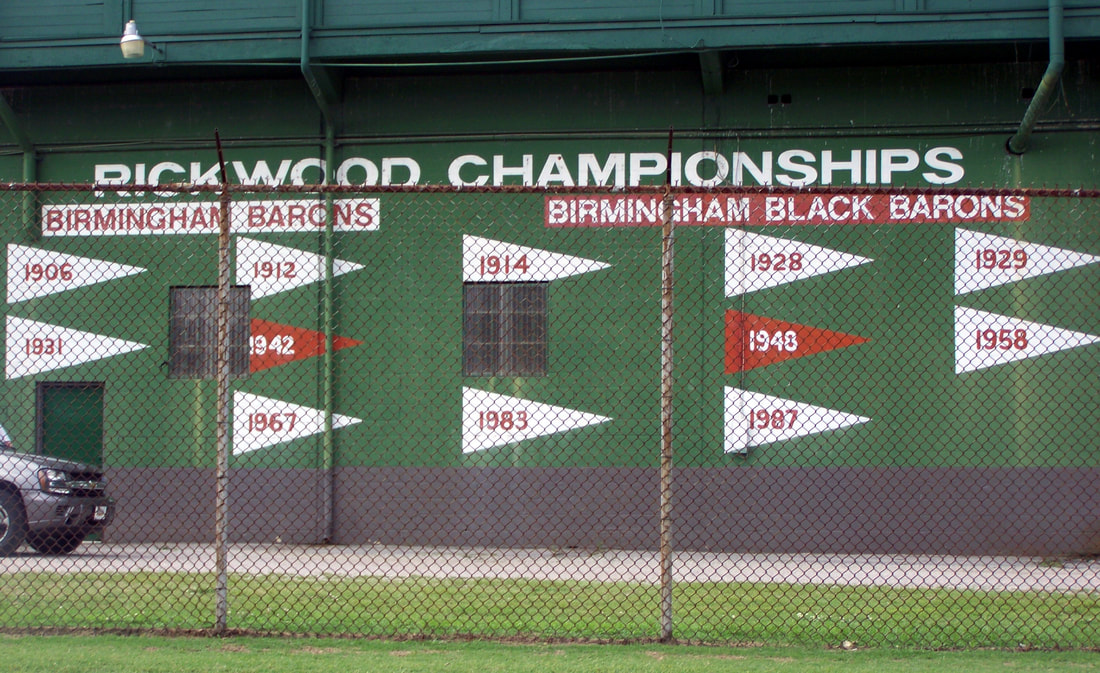 “A marvelous opportunity to learn, to share, and to meet like-minded enthusiasts from all over the country,” boasted Dick “Big Mo” Mahoney from Columbus (MS) and a big fan of Monte Irvin.

“The Rickwood Field tour was the highlight of the weekend,” claimed Wes Singletary from Tallahassee (FL).

“Historic, legendary Rickwood Field was off-the-charts in terms of a ballpark and a living museum.  You could feel the presence of the great ones in that magnificent venue,” added Tom Tuttle from Minnetonka (MN).

Raymo also shared, “I stayed through Sunday and attended the 16th Street Baptist Church service, and then spent the entire afternoon at the Civil Rights Institute and then took in the park where Bull Connor did his dishonor to our nation and the city of Birmingham.  It was a day that I am most grateful to have experienced.”

Tom Tuttle added that “The quality of the presentations made during the event was exceptional.  The scholarship was impressive, as was the clear passion for the subject matter exhibited by the presenters.”

“This year’s meeting was better than ever, but what put it far over the top were the visits to Rickwood Field and the Birmingham Civil Rights Institute,” said Roy Langhans from Cockeysville (MD). “Wow, what a great experience!”

“I enjoyed the conference immensely. It was very well organized with a nice friendly spirit.” Karl Lindholm  from Middlebury (VT)

“It’s hard to imagine a group any friendlier or more welcoming than the folks at the Jerry Malloy Negro League Conference.  And surely no area of baseball research has more to say about our cultural history.” Proclaimed Gary Mitchem from Jefferson (NC).

What they had to said about the Motown Malloy Conference - 2014

"The very best in the nine Malloys I have attended. Of particular note were the exceptional talks by George Skornickel, Karl Lindholm, Missy Booker and Don Spivey. George's data and comparisons on Vic Harris can only make one wonder why Vic Harris is not in our National Baseball Hall of Fame.  The quality over the years continues to improve, less reading of script and more interaction and visuals with the audience. Great job! The SABR National would benefit from any of these talks."

"The music (Beth Griffin & the All-Stars) prior to dinner was great."

"Mrs. Turkey and family were a prized treasure."  "I appreciate how involved that the Stearnes family was with the entire conference. Truly remarkable, loving people. We were very fortunate."

"I really enjoyed the authors panel.  It was a diverse group of authors with different types of interests."

A 2013 New Jersey Malloy Conference praise:
"In the three days since the conference concluded, I've reveled in remembrances of my Jerry Malloy weekend experience. I've never been to anything like it, where people with a true, sincere love for a subject come together and share a deep dedication to keeping an important part of American history vibrant and relevant. It was fun to be around interesting men and women during an informative, tastefully planned event. By the way, I really enjoyed the lead-in trailer to the awards ceremony; and the kids on Friday afternoon left me nearly speechless." - Mr. Al Hunter, Jr., co-author of "Thou Shalt Not Steal: The Baseball Life and Times of a Rifle-Armed Negro League Catcher," with Bill "Ready" Cash.